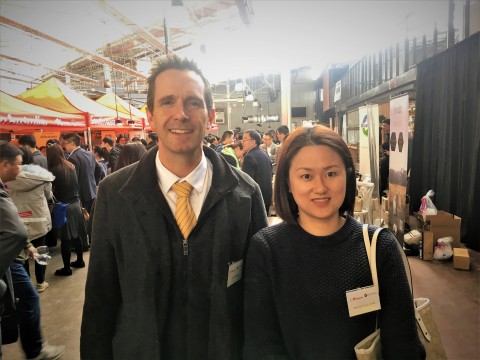 Work Visa Lawyers was pleased to accompany some of our business visa holders to the ACBC South Australian & Immigration SA Central Adelaide Trade Showcase. We would like to thank Immigration SA, as well as the China Business Council (ACBC), and KPMG for hosting the fantastic event.

computerized quality assurance systems on our production line we can offer exceptionally high standards of manufacture.

The Blue Lake Group produces a number of high-quality products including:

We believe that Blue Lakes infant formula will be in great demand for export to the Asian markets.

For almost 150 years now Bickford & Sons have been proudly producing a premium range of exhilarating beverages with superior quality and taste, including their new 23rd Street Distillery is the new incarnation of a century-old landmark at Twenty Third Street, Renmark, in South Australia’s fertile Riverland. Chris Johnston can personally attest to the superior quality of 23rd Street Distillery’s products and how well they combine with Bickford & Sons signature drinks. The distillery offers a variety of alcoholic beverages charting old-school craftsmanship including:

Clean Seas was formed by The Stehr Group in 2000 and was publicly listed in 2005. Clean Seas initial purpose was to propagate and grow Southern Bluefin Tuna, however, its secondary endeavor with regionally indigenous Kingfish became highly prized in its own right. As a consequence, Clean Seas refocused its efforts on sustainable production of Hiramasa Kingfish.

The Spencer Gulf Hiramasa Kingfish brand is featured on menus in many of the best restaurants in the world including: Again, we would like to share our appreciation with everyone who made the ACBC South Australian & Immigration SA Central Adelaide Trade Showcase possible. Work Visa Lawyers is confident the event and assist in furthering the growth of South Australia. We would like to wish every company we spoke with including Blue Lake, Bickford & Sons, and Clean Seas best of luck in their future endeavors.

25 Reasons Why Your Australian Business Visa Was Refused in 2019

457 visa holders with children in South Australia will need to pay contributory school fees in January 2018! Start applying for your permanent visa now to be exempt!